The best modern architecture in Copenhagen

Copenhagen has undergone an enormous development over the last 25 years. The architectural landscape has changed radically with the creation of a wide range of new, exciting buildings. Meanwhile, major changes have also been made under the ground the building of new metro lines.

Copenhagen has changed and renewed itself in recent decades and has become a more vibrant, sustainable and liveable city than before. These changes have undoubtedly come into play when Lonely Planet in 2019 chose Copenhagen as the best city to visit in the world. .

Below we have selected a number of examples of modern architecture built over the last 25 years (in the period 1995 and 2020) - with one exception: we have included one of the city's most important classics, namely the SAS hotel designed by Arne Jacobsen. 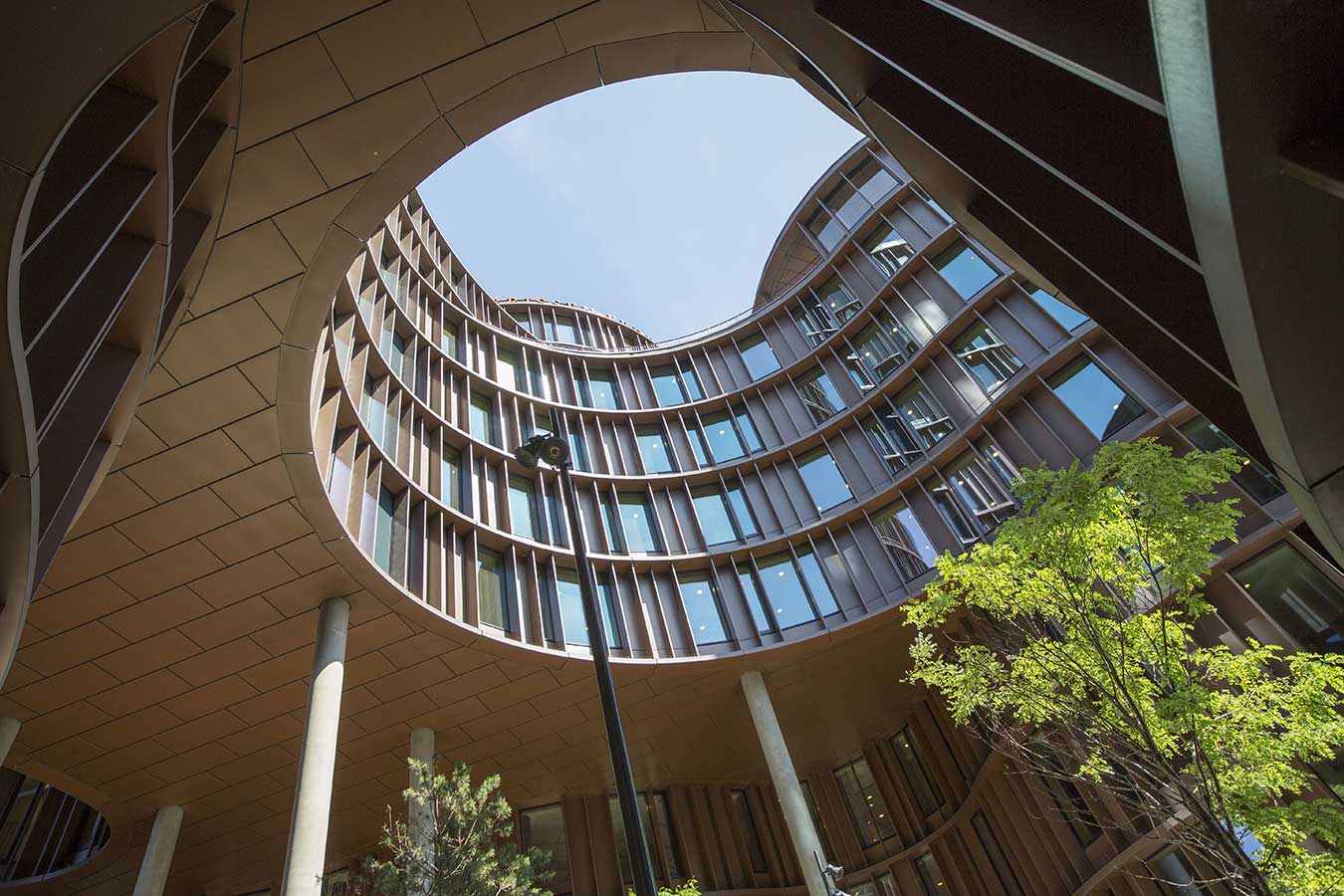 The Axel Towers, not far from the Town Hall of Copenhagen

One of the most popular buildings in recent years is Axel Towers at Axeltorv in the center of Copenhagen, which is located between the Central Station and Tivoli.

There are 5 adjoining towers, with the highest measuring 61 meters and the towers housing offices, restaurants and shops. They are designed by Lundgaard & Tranberg. The building is owned by ATP Ejendomme, PFA and Industriens Pension.

The black diamond is the new extension to Copenhagen's Royal Library on Slotsholmen, designed by the architectural firm Schmidt Hammer Larsen. The library has helped to change the waterfront at Copenhagen. The distinctive black facade is created using 75-kg heavy blocks of black granite from Zimbabwe.

The library has more than 400 rooms and in addition to reading rooms and research halls, there are several lecture halls, and the library also organizes concerts and exhibitions. 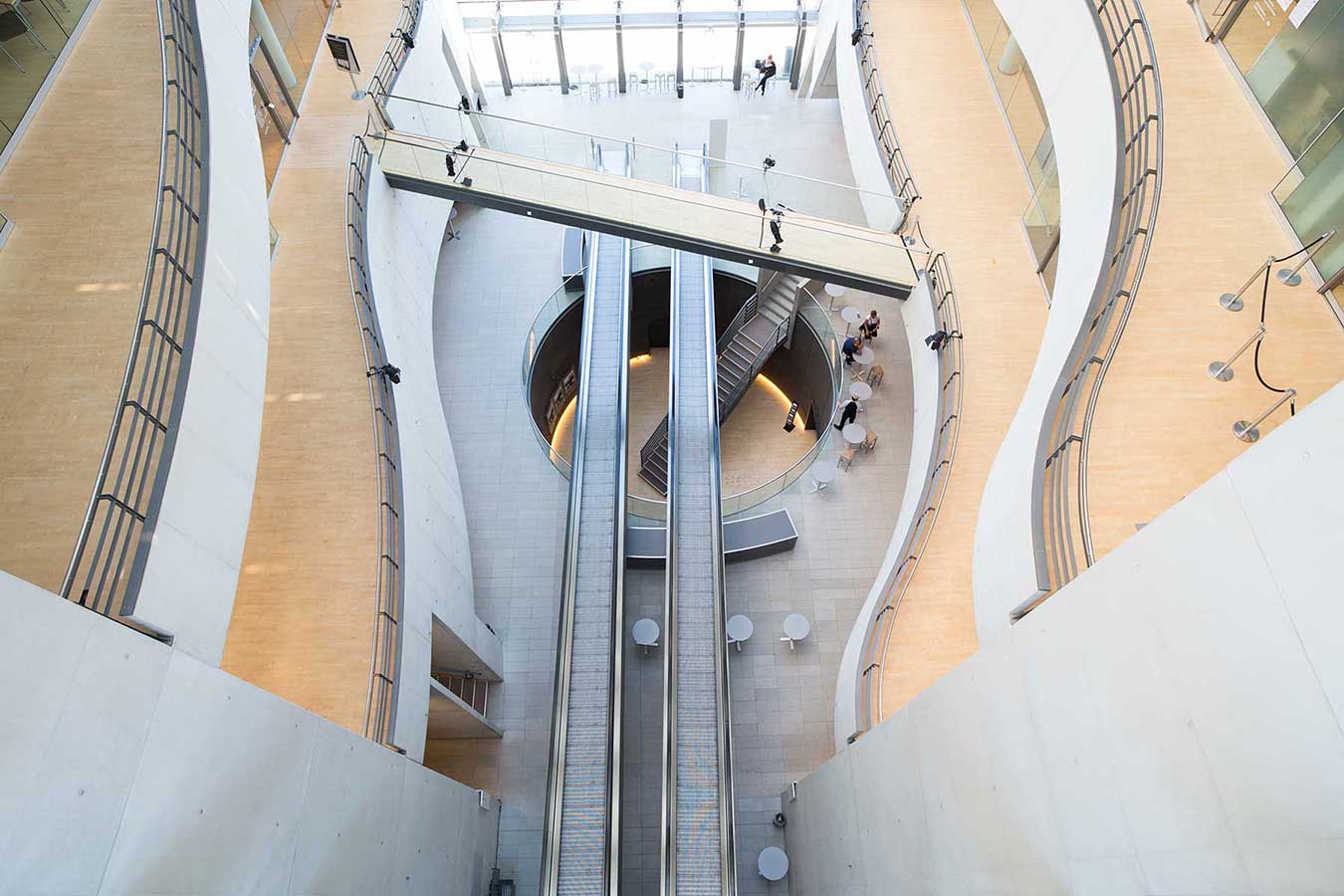 The Aquarium Den Blå Planet replaced the Danish Aquarium in Charlottenlund, which received a large increase with the new building, which cost DKK 630 million. kroner. The aquarium is divided into 4 areas: The Warm Ocean, the Cold Water Basin, the Amazon (The Sunken Forest), the Coral Reef and the Lakes of Africa.

The building was designed by the Danish design studio 3XN, which was also behind Bella Sky. The building resembles an eddy current, and the facade consists of aluminum sheets resembling fish scales. The aquarium measures approximately 12,000 m2, ie a little more than a football pitch.

This classic building designed by Arne Jacobsen is located in the heart of Copenhagen. It is an architectural historical and an example of functionalism and design that merge. The building also changed Copenhagen's skyline forever. The building was built in the period 1958-1960, ie at a time when there were no high-rise buildings in Copenhagen. The building measures 69.6 meters high.

The hotel also served as an airport terminal - and you could take a shuttle bus directly to the plane from the hotel.

Arne Jacobsen was behind both the architecture and the interior design: classic furniture such as the drop, the egg and the swan, all of which were designed especially for the hotel.

The building is on 22 floors and has a total of 275 rooms. The building's interior art was completely renovated in 2017 - but one room was allowed to stand: room 606 stands exactly as when the hotel was built.

The building's inspiration was Lever House on New York's Park Avenue. Yes, one can go so far as to say that the hotel is close to being a faithful copy of the building designed by Skidmore, Owings and Merrill (SOM) to the coveted New York address 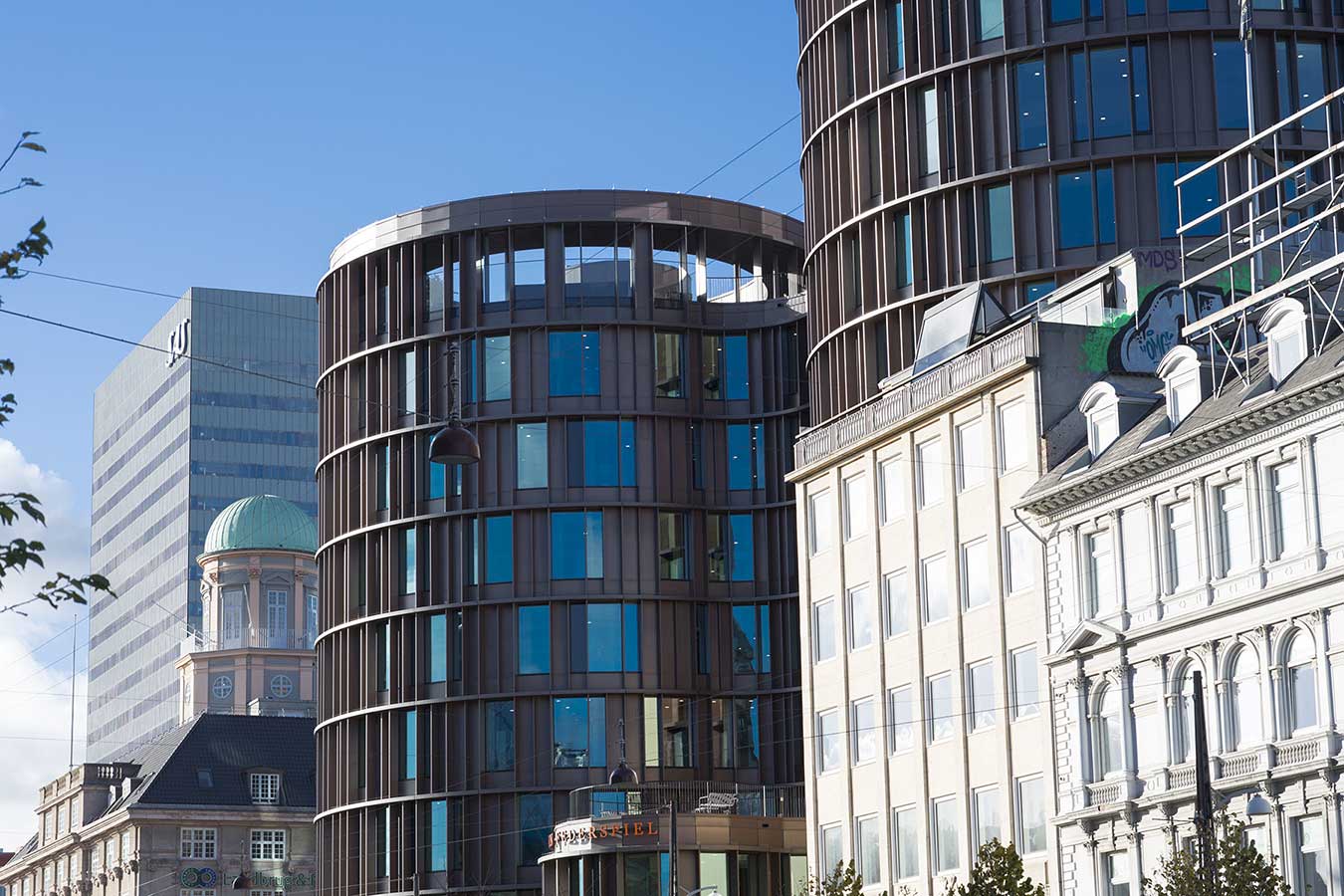 The SAS Hotel - here seen behind the Axel Towers

The housing block 8tallet is designed by Bjarke Ingels Group (BIG) and comprises 476 homes and commercial leases. The large building amounts to a total of 62,000 m2.

The shape of the building is similar to an 8-figure, which gives each home light and views. At the bottom of the building are companies and day care institutions. The building contains different types of housing: two-storey terraced houses with individual gardens, penthouses with roof terraces and apartments with balconies.

The house has a long footpath of one kilometer. The buildings can be visited and guided walks are arranged. The figure has won several awards, including the Scandinavian Green Roof Award and a nomination for the world's best housing construction.

The VM Houses are an innovative housing project with two separate apartment buildings, and the buildings are named after their shapes that look like a V and an M. The buildings were designed by Bjarke Ingels and the artist Julien de Smedt and were completed in 2005. Bjarke Ingels himself lived in one of the apartments in the period 2005 to 2008.

The buildings are inspired by the architect Le Corbusier's idea of the Unité d'Habitation: large, modernist apartment complexes that were supposed to be self-sufficient. The complex was thus to function as a small town, with shops, restaurants, a school and a library. The buildings were, as was often the case, built for low-income people. The V-house is supported on pillars and each apartment has a triangular balcony.

Another of BIG's projects in Copenhagen, in this case a social housing project. These are public housing in Copenhagen's Northwest Quarter. A number of bright apartments with cheap prices. The 65 homes are designed for Bo-Vita, and are located in the Northwest Quarter. In total, there are 22 different types of homes, divided into 2-, 3-, 4- and 5-bedroom apartments. The apartments have high ceilings (up to 3.5 meters) and large windows from floor to ceiling. The structure is made of concrete and the exterior of the apartments is clad with wood in vertical and horizontal modules.

To the north, the building faces the courtyard and to the south to Dortheavej. All apartments have internal balconies (on first floor: a terrace) and inside white painted plaster and wooden floors are used. In 2018, the Danish Architect Association awarded the homes the 'Lille-Arne award'. 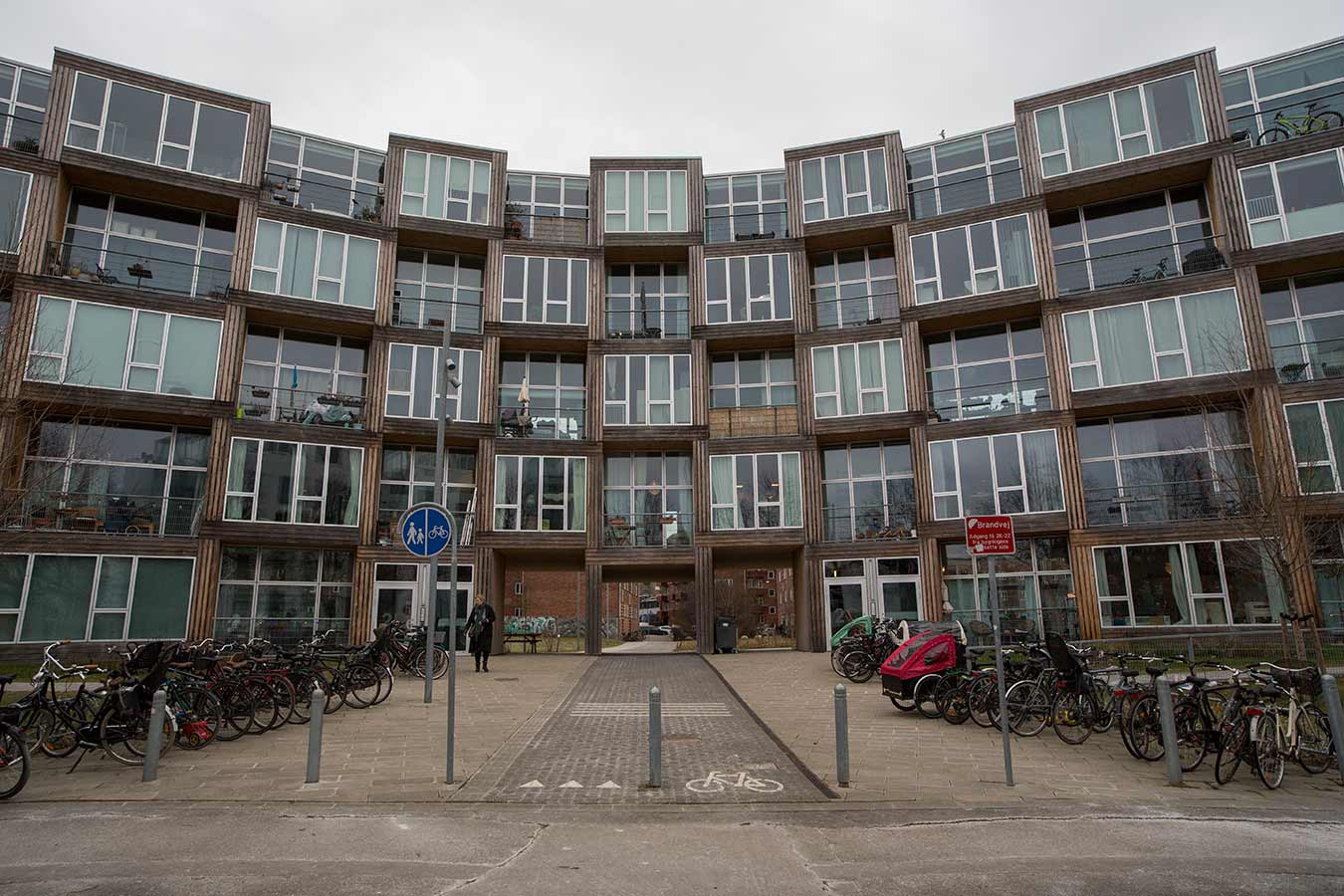 Nordhavn is undergoing major changes in recent years. One of the most exciting projects is the transformation of Portland's old cement silo from 1979 into offices. The Swedish construction company NCC collaborated with Design Group Architects and the construction took place in the period 2013-2014. The offices are located 24 meters above the ground. Portland Towers is located on Göteborg Plads in Nordhavn 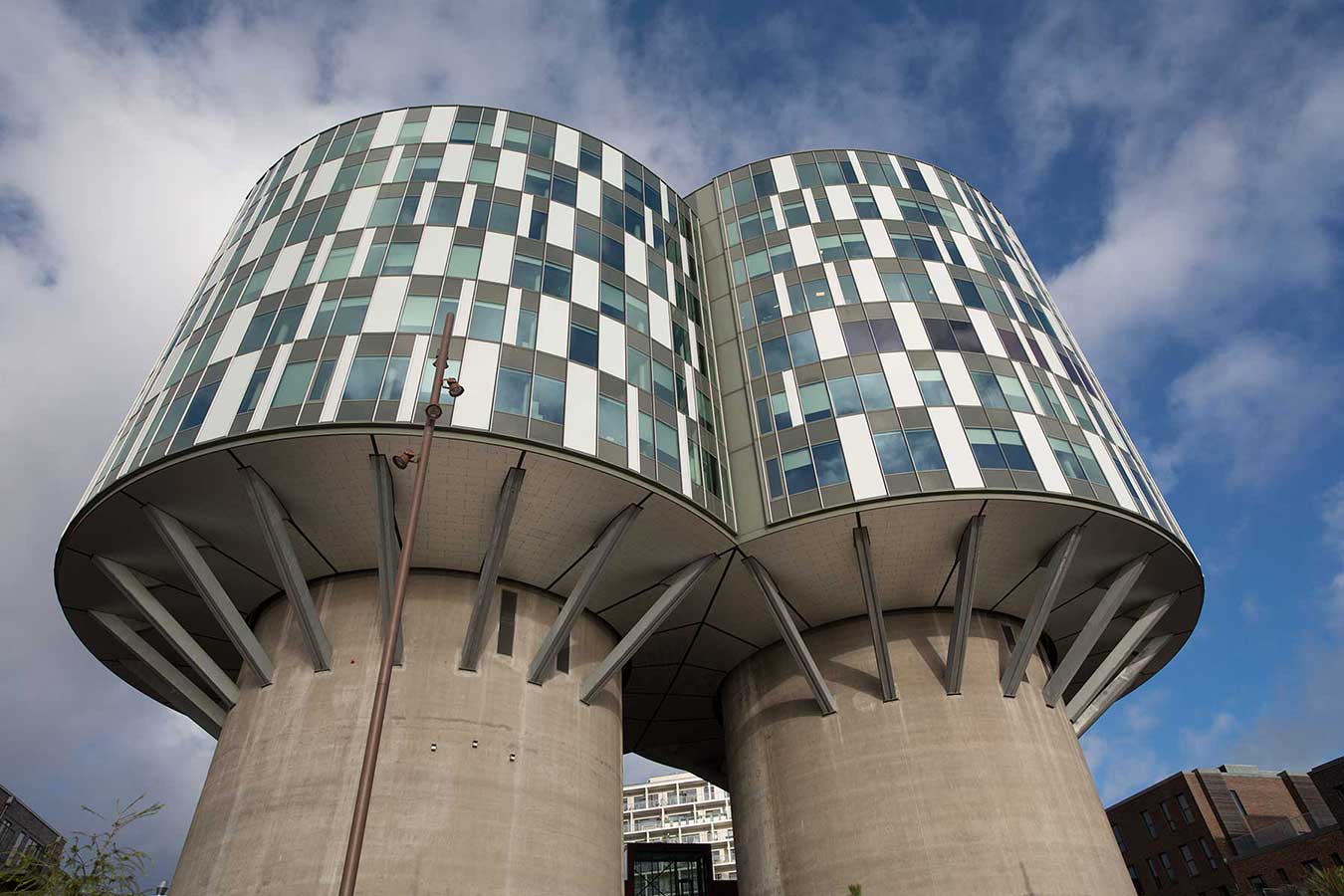 The circular bridge is located in Christianshavn between Applebys Plads and Johan Semps Gade, where it crosses Christianshavns Kanal. The bicycle bridge was designed by the Danish-Icelandic artist Olafur Eliasson, with engineering help from Rambøll. The circular bridge won the pier as 'construction of the year' from Dagems Byggeri in 2017. The bridge is a gift from the Nordea Foundation. The bridge was completed in 2015.

The Nordea Foundation writes about the bridge: "The circular bridge is much more than a bridge - it is a new meeting place." 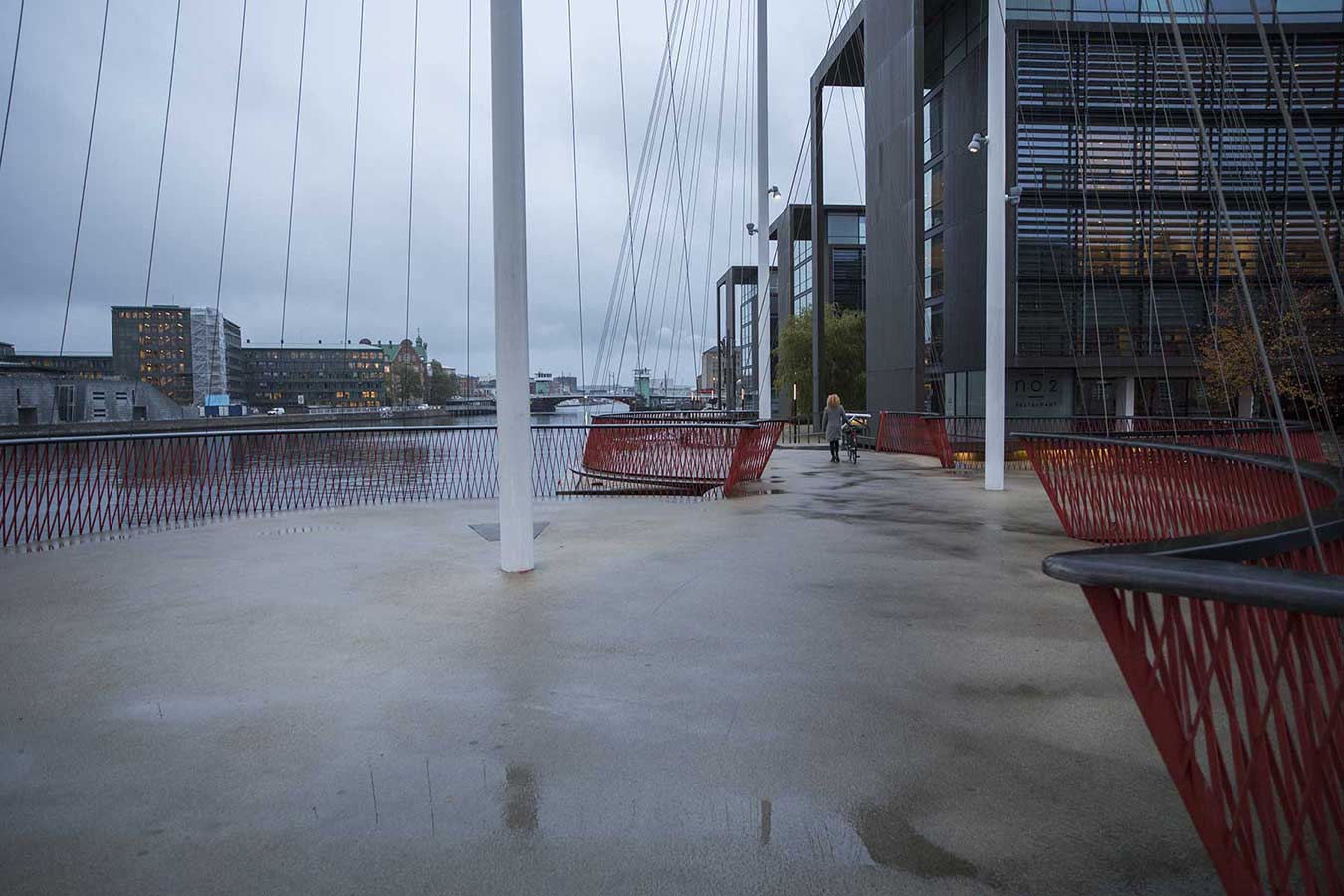 The Circular Bridge, here on a rainy day i autumn, is located in front of the Black Diamand

The Metro of Copenhagen

The first two links, M1 and M2, were completed in 2002. The metro has been expanded enormously over the last two decades: in 2007, the M2 was extended to the airport, and in 2019, the city ring (M3), which connects the entire city center in a circle. of stations, finished. The Nordhavn metro M4 was ready in 2020.

The metro was designed by KHR Arkitekter and Vilhelm Lauritzen Arkitekter. The engineering work was carried out by Rambøll, Grontmij and COWI. The city ring is built by Italian Salini and the train is also Italian, produced by Ansaldo. The metro in Copenhagen has been named the best in the world. 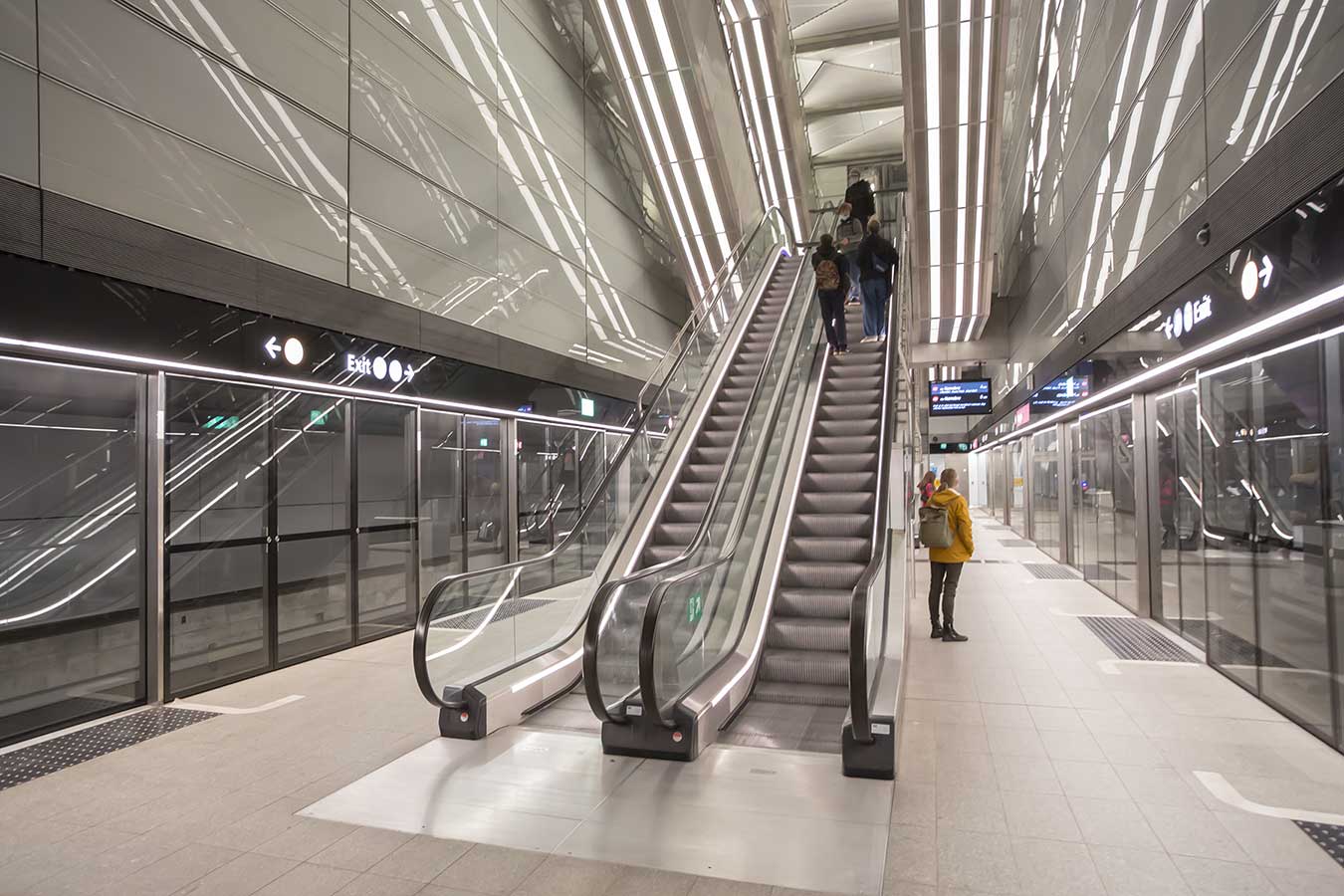 The Tower of Mærsk

The Maersk Tower on Blegdamsvej houses the Faculty of Health Sciences at the University of Copenhagen. According to their website, the faculty wants to create communities between the university and the city. The building was designed by the architectural firm C. F. Møller and was built in the period 2012 to 2017. The Maersk Tower was nominated for the Mies van der Rohe Award in 2019 and won the European Copper in Architecture Award in 2017. The construction cost DKK 1.5 billion. of which A.P. The Møller Foundation paid the DKK 600 million. kroner and 125 mill. DKK for the equipment.

There is access to the building for the public and we can recommend enjoying the beautiful view from the top. Enter via the main entrance and take the elevator to the 15th floor. From here you can see most of Copenhagen and to the lakes. 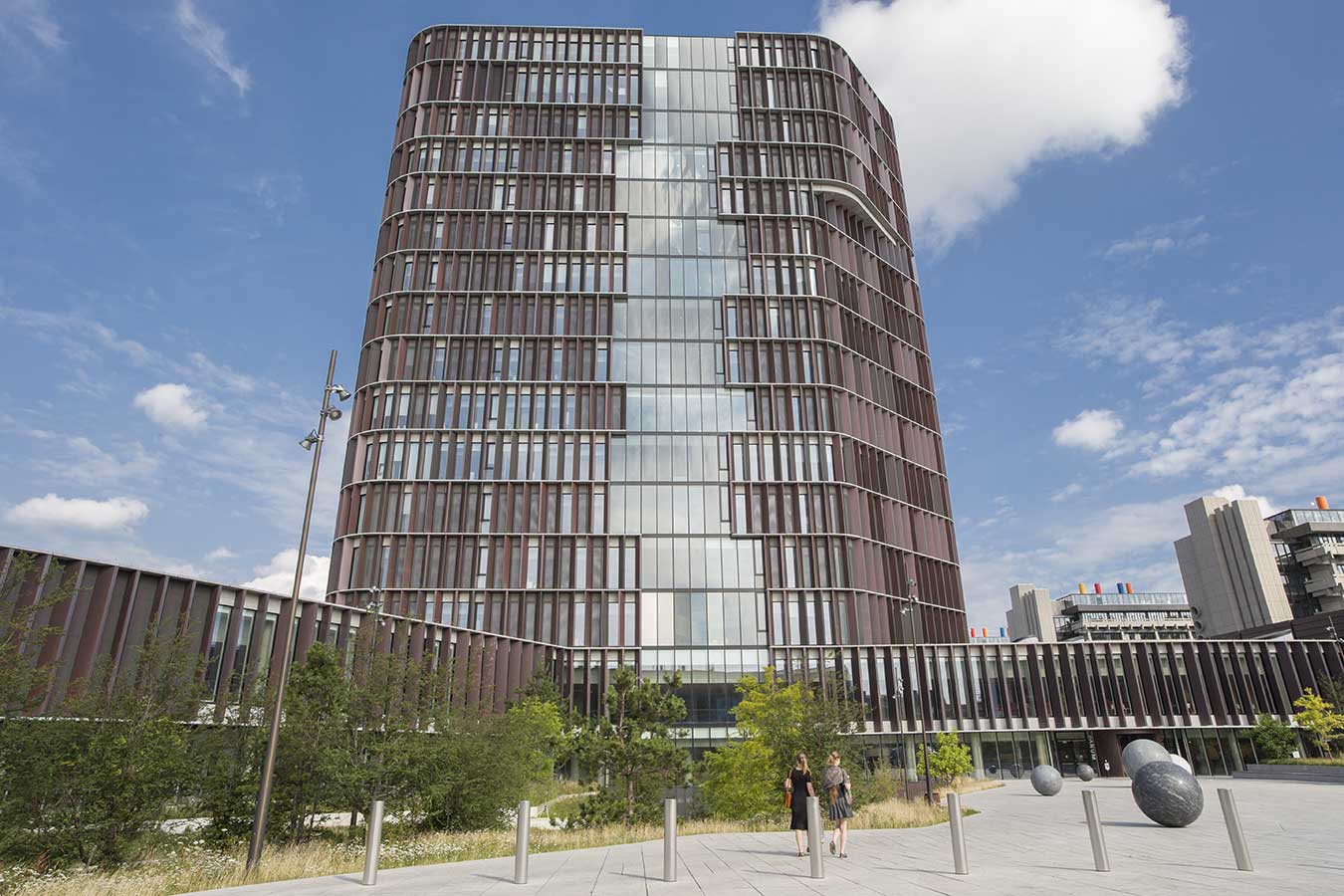 René Redzepi's new version of Noma, the world-renowned restaurant that has been voted the best in the world several times, is another of BIG's projects. The interior is made by the Danish studio David Thulstrup. David Thulstrup designed a brand new chair for the restaurant after he and René Retzepi had tried 50 chairs and the chair was produced by Brdr. Krüger. In 2018, the interior design won the carpentry award, which is administered by the Copenhagen Carpenters' Guild.

After closing the restaurant in 2017, the new Noma has now opened on Refshalevej on the outskirts of Christiania.

BIG has designed what they call a garden village consisting of a total of 11 houses. Glass is the supporting element, and this material manages to create a symbiosis between interior and exterior and bind the spaces together with the immediate nature and gardens. 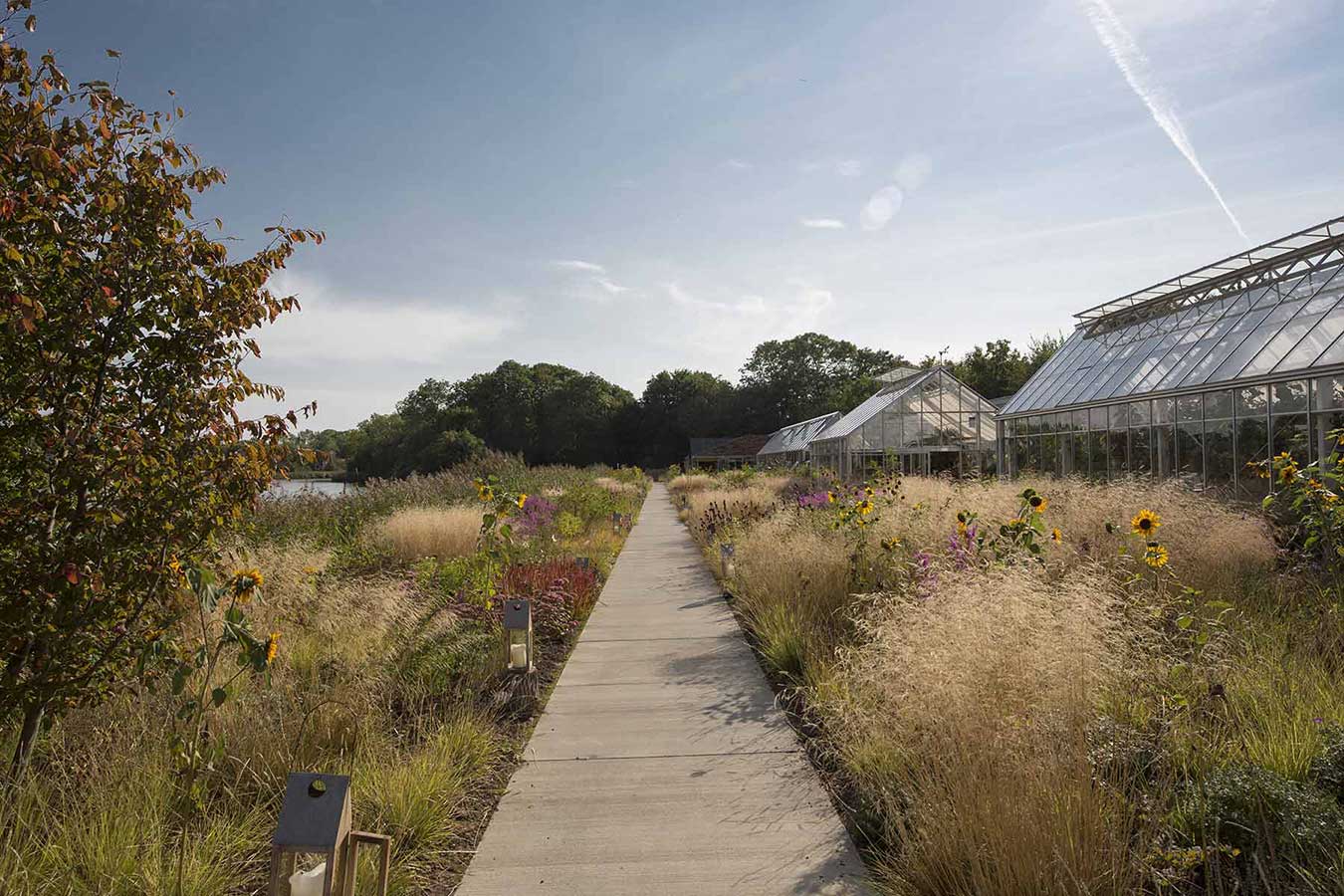 The Crystal by Nykredit

The crystal by Nykredit facing harbor is one of the more interesting modern buildings at Kalvebod Brygge. The architectural firm Schmidt Hammer Lassen is behind the construction, which breaks with the many square buildings in the area.

The building has six floors and measures 34 meters. The building is designed based on a number of environmental requirements for sustainability in terms of energy, water and light. The building was built between 2008 and 2010. In 2011, the building won the European Steel Design Architecture Award and the award for Best Structural Design of the Year. 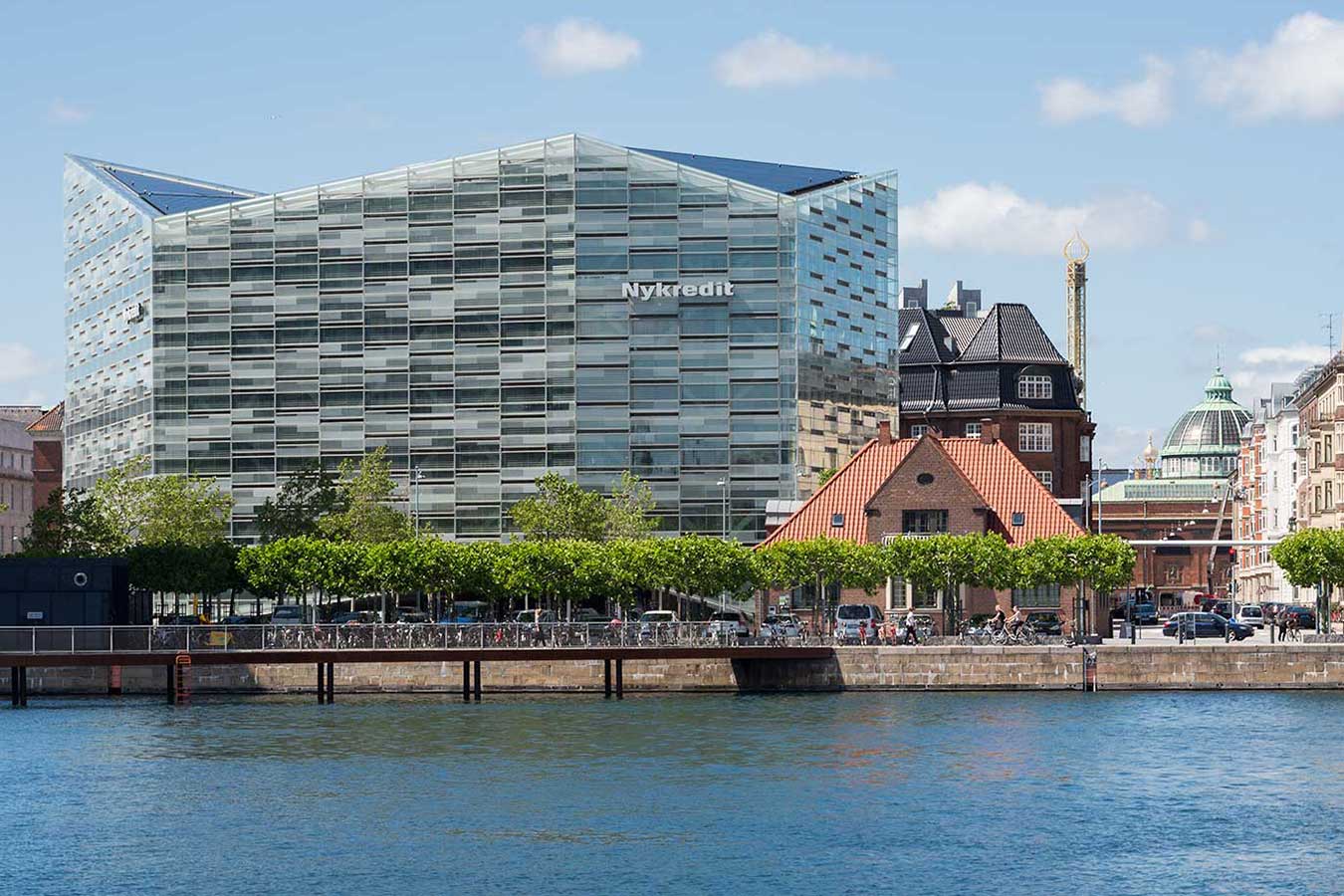 These student houses on Rued Langgaards Vej 10-18 in Ørestaden were created by the design studio Lundgaard & Tranberg. This exciting, circular building have 7 floors. The proyect was a donation from the Nordea Foundation, and they embody the dream of creating "the student housing of the future". The facade is made out of copper-based alloy. 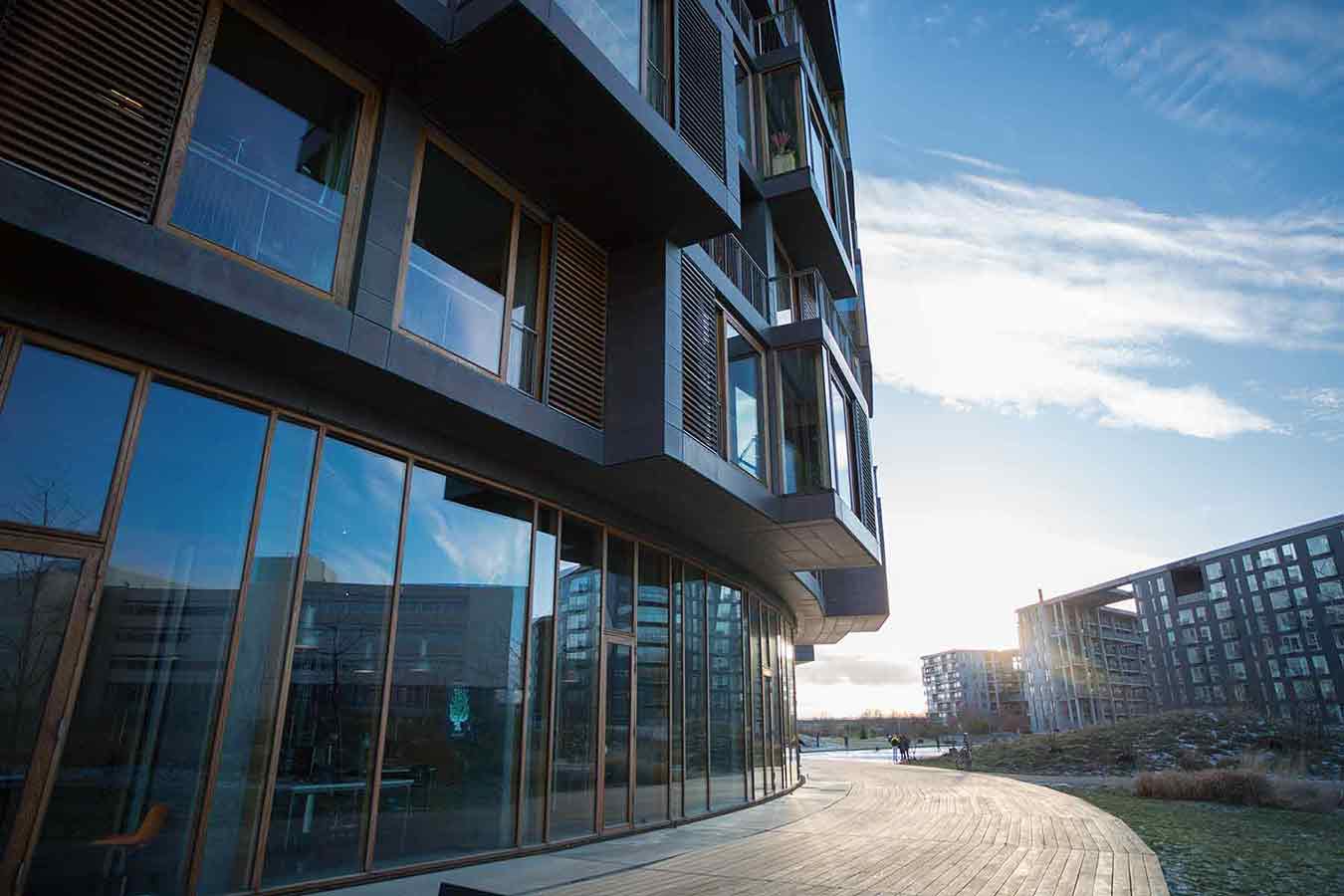 The bicycle snake is a 235m long cycle path that connects Fisketorvet with Dybbølsbro and Bryggebroen. The beautiful cycle bridge and cycle path lifts cyclists 6-7 meters into the air on a bridge built in steel, painted white and has an orange coating.

The snake was designed by the architects Dissing and Weitling, who i.a. is also behind Åbuen, Bryggerbroen and the Faculty of Humanities Library. The bicycle hose is used daily by more than 12,000 cyclists, and the number of cyclists is increasing year by year. The City of Copenhagen has a desire to become the world's best cycling city in 2025, and the cycle hose and the city's many cycle paths and bridges are key elements in this plan.